As technology moves forward, so does our cutting machines. The biggest improvements have been in the motion control realm. The CNC Computers have more processing power in smaller footprints. Drives have also benefited from miniaturization, as well as increased power.

Modern CNCs have larger, more colorful screens than units from even a decade ago. Touch screens have made the Human/Machine Interface (HMI) very flexible while offering many more options than in 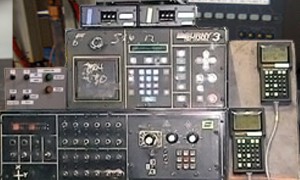 the past. This is a major improvement over the Burny 2s and 3s from the 90’s, with the single line Alpha-Numeric screen. One advantage is that the learning curve is shorter. It is much easier to teach a new operator when you can see an image of the cut part in front of you, rather than trying to imagine how the part fits the plate. The Digital Networking of the new breed of CNCs allow better control of the drives, eliminating poisoning problems from noise on the Analog Control Signals.

Modern Drive systems have much better response and accuracy. The Brushless AC Servos have many benefits over the DC Brushed systems of the past. First off, no brushes to wear out. Thanks to microprocessors embedded in the Drive Amplifiers and High Strength Magnets, the motors are controlled through electronic switching of the internal coils of the motor. This eliminates arcing and wear points caused by brushes. The magnets are mounted in the rotor and so no direct electrical connections are needed. An added benefit is the motors have a flat torque curve, meaning the output power of the motor, is constant over the entire speed range. Yesterday’s brushed motor torque increased with speed to a point, then started to decrease. Slower speeds were sometimes jerky and would leave flat spots on curved cut pieces. A flat torque curve allows for maximum power no matter the speed. The amplifiers are also smart enough to sense motor problems and shut the motors down before they burn up, due to mechanical jamming. A big problem with brushes.

Plasma systems have also improved greatly. Some of the cuts achieved come close to the cut quality of laser-based units. Most of the improvements come from Increased Arc Density. This is the amount of thermal energy concentrated in the area of the cut. The newer High Density Systems have 3 times the heat concentrated in the main cutting arc. That along with improved torch design, gas flow, and the ability to change torch parameters (speed, height, gas volume) ‘On the Fly’ have propelled Plasma Cutting to this higher cut quality. Consumables also last longer, increasing profit margins. Less secondary prep also reduces overall cost to produce useful finished parts.

Alan Bradford has been rebuilding and servicing cutting machines for over 30 years.  Alan is President of Plasma Technologies Located in Canaan NH.

View all posts by: Craig Bradford